“The objects on this page are based upon polyhedrons. The zebrawood, brazilian cherry and lazpacho spheres are based upon an icosohedron. Each of the 20 triangular faces on an icosohedron has been replaced by a circular disc which has undergone further shaping in some cases. The discs are joined at the edges by wooden keys. The openings that are formed at the intersections of five discs allow you to look through the sphere and see the inside surface.  The spalted beech, flame box elder, padauk sculptures are based upon a dodecahedron. These objects are not spherical because the 12 discs were cone shaped. The points from three adjacent discs in these objects each form a triangular face.  I am exploring how the shape of the final object changes as you alter the shape of the component parts. 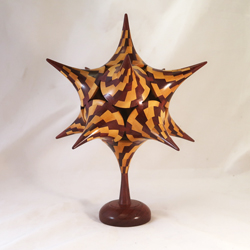 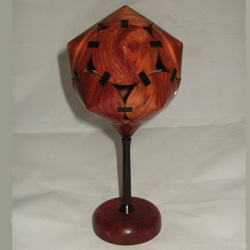 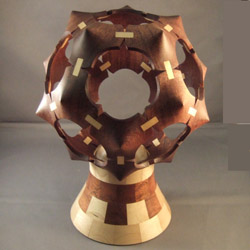 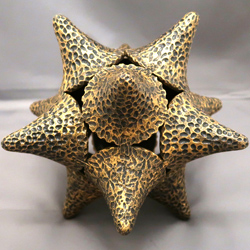 “Blackthorn” This sculpture used the same construction method as previous sculptures. After turning, the cones were carved, and the sculpture was assembled. After minor additional carving, the object was painted with black gesso and then highlighted with a gold gilding paste. (8″ between opposing points, $300)

Sculptures that are no longer available 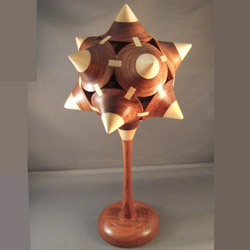 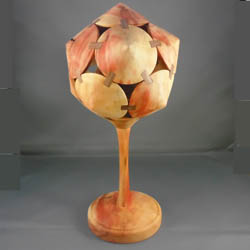 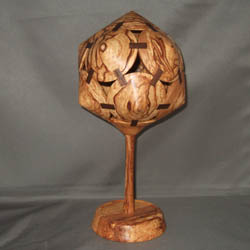 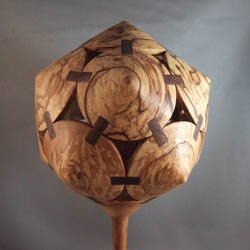 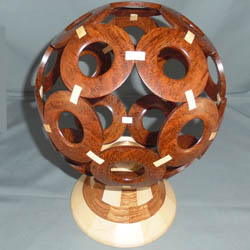 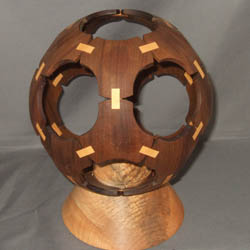 Lazpacho and lemonwood icosoahedron (prototype, not for sale). This piece received a red ribbon at the Totally Turning Symposium, 2016. 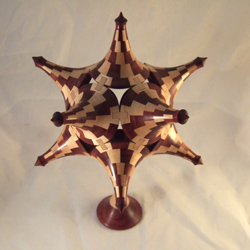 “Starfire” This is the latest version of the dodecahedron objects. I have combined standard segmented turning to make rings, so that each of the twelve “sides” sweeps up to a point. Maple and bloodwood (688 pieces) 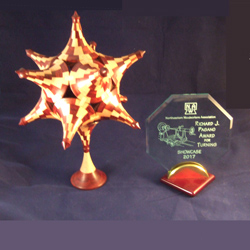 Starfire received the Richard Pagano Award at the Totally Turning Symposium in 2017. It is a “Best in Show” type of award.